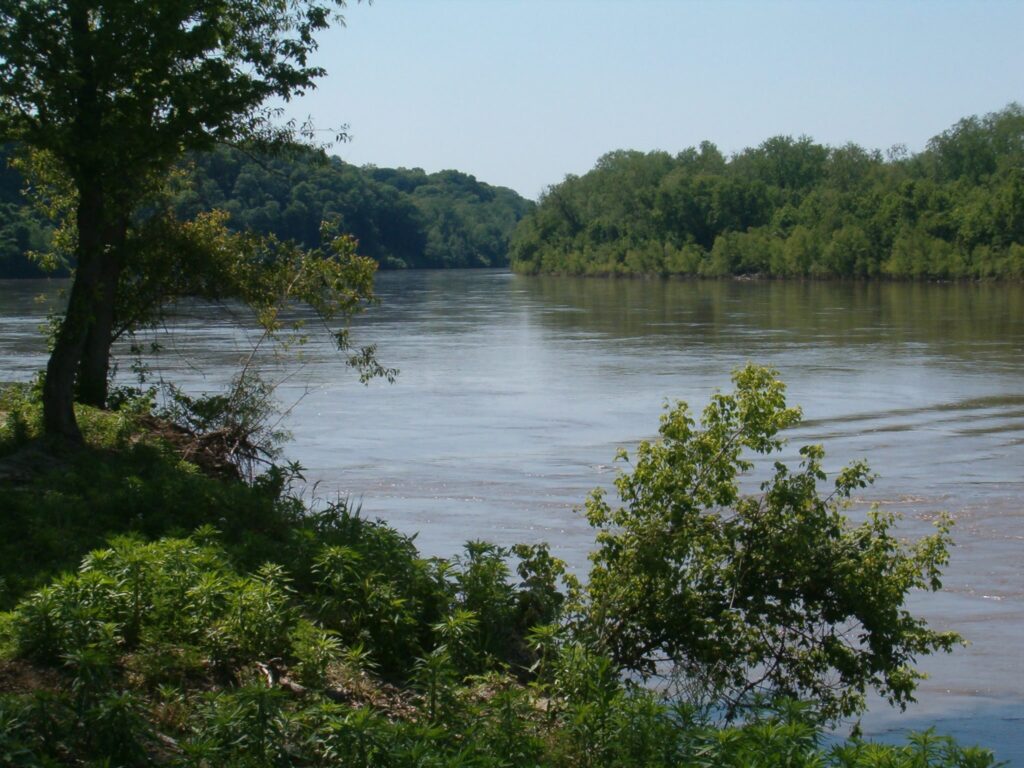 Pelican Island is located in the Missouri River and occupies much of the far north portion of Old Jamestown.  It is separated from the mainland by the Car of Commerce Chute, which was named for a steamboat that sunk there in 1832.  “Car of Commerce” was actually a fairly common steamboat name; at least five boats with that name did trade along the western rivers.  Before the age of automobiles, ‘car’, from the Latin carrus, was a poetical word meaning ‘chariot.’1

According to Joseph Desloge, Sr.,’s grandson, Wesley Fordyce, Pelican Island in the mid 1900s had 300 acres that had been cleared and used by farmers.

3/5 of Pelican Island was donated to St. Louis County Parks by three children of Joseph Desloge, Sr., in 1976.  The Parks Department received a federal grant to purchase the remaining part of the island and had plans to have a walkway to it from Douglas Road.  In 1990, St. Louis County Parks gave the island to the Missouri Department of Conservation (MDC) as part of a deal involving another tract of land on I-44 and the lease of St. Stanislaus Park to MDC.  The Conservation director again mentioned building a walkway to the island, this time from Sioux Passage Park.  The walkway has not yet happened.  During times of low water, the island is accessible from Sioux Passage Park and Musick’s Ferry on foot, but most of the time it can only be accessed by boat.2

Pelican Island is well described on the Missouri Department of Conservation web site:

This site is considered to be the best remaining example of a mature floodplain forest in the Missouri River floodplain of Missouri. An 1878 map showed two islands in the Missouri River that included what is part of Pelican Island today. In 1945 Congress passed an amendment to the 1912 Missouri River Bank Stabilization and Navigation Act which made provisions for a nine-foot deep, three hundred foot wide channel. Man-made changes to the river since 1945 have indirectly produced the one large island, Pelican Island, of today.

Today the island is comprised of a mix of riverfront forest, slough, shrub swamp and old-field habitat. The floods of 1993 and 1995 killed a number of trees but riverfront forest is a dynamic community type and new trees have grown back in. Cottonwood, black willow, sycamore, hackberry, sugarberry, silver maple, box elder and red mulberry form forests ranging from thickets of young trees to more mature stands. Vines are common including raccoon grape, other grape species and poison ivy. Unfortunately, due to the dynamic nature of this ecosystem a number of invasive, exotic species occur in the understory including the exotic vine species, Japanese hops.

In the spring, just as the forest is greening up, look for migrant warblers including the American redstart, Nashville warbler, magnolia warbler, black-throated green warbler and the bay-breasted warbler. In the Car of Commerce Chute and other riverine habitats around the island are important areas for big river fishes such as sturgeon chub, sicklefin chub, channel catfish, and flathead catfish. The island’s forested wetlands provide habitat for large numbers of gray treefrogs.3

Please visit “Rome of the West” below for more history of Pelican Island.

1 Car of Commerce Chute, Rome of the West